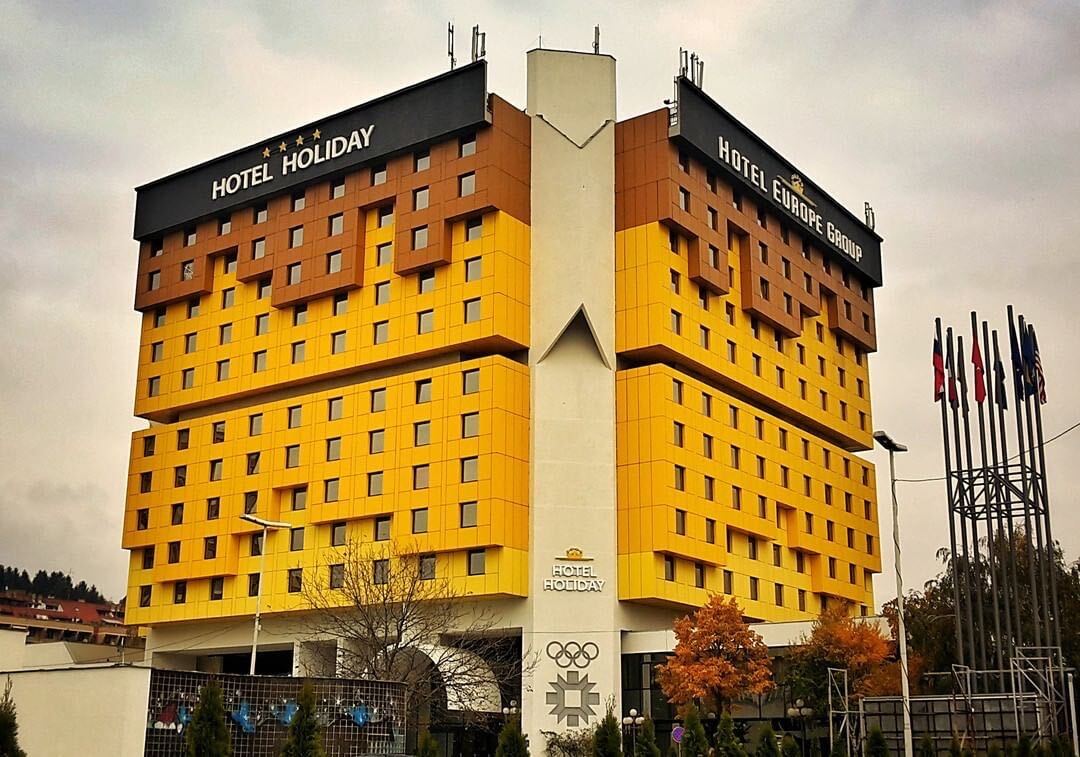 The Holiday Inn, Sarajevo is a symbol of the Bosnian-Herzegovinian capital and a heroic survivor of the Bosnian War. The historic hotel was reopened in 2016 and is today known as Hotel Holiday. The hotel was closed for a year due to license loss and bankruptcy, but today has a new lease of life after being bought by Bosnian businessman, Rasim Bajrovic.

The 1984 winter Olympics in Sarajevo were a high point in the city’s modern history and the iconic Holiday Inn hotel was built for purpose.

The hotel was designed by Bosnian architect, Ivan Straus, and built in 1982 and opened in October 1983 by the president of the International Olympic Committee, Juan Antonio Samaranch. The bright yellow façade quickly became a source of controversy, but luckily the huge success of the Olympics overshadowed.

The reputation of the hotel was established as it became the place to be seen. Guests included international and domestic musicians, sportsmen, actors and politicians.

Soon after the Olympics, the Yugoslav crisis intensified. Politicians would frequently gather at the hotel as a base. In 1992, Bosnian-Serb Serbian Democratic Party led by Radovan Karadzic, held regular meetings in the hotel. It even became a temporary home for the Karadzic family.

As the siege of Sarajevo intensified, international news agencies established themselves in the hotel. The hotel remains familiar to many around the world, who remember the news reports filed from the hotel at the height of the 1990s Bosnian war, when reporters used it as their base.

The hotel was often the only place with food, water and electricity. The electricity generator ran off oil bought on the black market using foreign currency that was brought in by the journalists. Water was often unavailable and rarely heated. Staff had to negotiate sniper alley in order to get to work at the hotel.

The siege of Sarajevo, the longest siege of a capital city, lasted over three years. The hotel was hit by shells hundreds, if not thousands, of times. Yet, in comparison to other buildings along sniper alley, it was relatively unharmed. It was believed that there could have been an agreement between the Bosnian government and Serb nationalist forces to spare the hotel.

After the signing of the Dayton Agreement in 1995, the hotel was home again for the international visitors to the city of Sarajevo.

In 2000 the hotel was privatised and changed hands multiple times. It was a victim of the impact of the global economic crisis and the ongoing political situation in Bosnia.

Today the hotel is back to its roots after a year of closure. The yellow façade is back and guests once again frequent the hotel, it’s restaurant and spa.