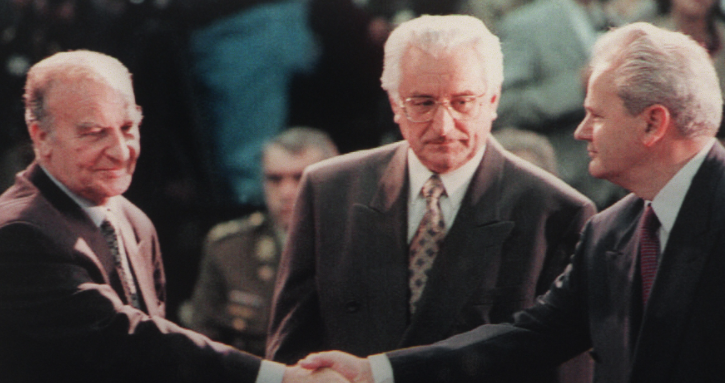 The International Criminal Tribunal for the former Yugoslavia, a United Nations court of law established to handle the war crimes that took place during the conflicts in the Balkans, started its work in The Hague. The first person to be convicted was Drazen Erdemovic, a Croat fighting for the Serbs and influential in the Srebrenica massacres. He was sentenced to five years’ imprisonment.

An international conference in Bonn extends the powers of High Representative for Bosnia and Herzegovina in accordance with the Dayton Framework for Peace to oversee the civil implementation of the peace agreement. The meeting in Bonn in late 1997 granted further powers in order to avoid the peace agreement implementation being delayed or obstructed by nationalist politicians.

General elections in Bosnia were held in September. Elections for the House of Representatives were divided into the Federation of Bosnia and Herzegovina and Republika Srpska. The presidential elections saw each of the three national communities elected a President. Nationalist parties succeeded and Izetbegovic was re-elected.

In the parliamentary elections the Socialist Deomcratic Party emerged as the largest party taking the majority of the seats. Muslim and Croats elect moderate parties, and nationalists gain the upper hand for the Serb entity. The Serb nationalist party are forced to form a coalition headed by Prime Minister Mladen Ivanic. All of which allow the international community a degree of comfort as moderate leaders begin to make inroads and the increasing numbers of voters appear to be paying attention to their messages.

March: Ante Jelavic, Croat representative in the collective presidency, is dismissed by the decision of the High Representative as his party threatens to declare an independent Croat Republic. It was ruled that Jelavic directly violated the constitutional order of the Federation of Bosnia and Herzegovina as he called for a spate governing entity of Bosnian Croats.

May: Bosnian Serb nationalists were involved in rioting and violence aimed at Muslims that took place in Trebinje and Banja Luka in an effort to break up ceremonies marking the reconstruction of mosques destroyed during the war. Nationalists set buses on fire and trapped around 300 Muslims and international delegates in an Islamic Centre.

August: The ICTY sentence Bosnian Serb General Radislav Krstic to 46 years’ imprisonment for genocide and his role in the massacre of thousands of men and boys in Srebrenica. Krstic became the first man convicted of genocide by the Tribunal

Paddy Ashdown becomes UN High Representative in May 2002. He is credited with several major breakthroughs in the region, including strengthening the central state institutions and bringing statewide legal bodies such as State Investigation and Protection Agency.

In October presidential, parliamentary and local elections see Nationalists resume power in all three entities. Three months later, in early 2003 a new government is approved by parliament and is led by Adnan Terzic.

The European Union Police Mission (EUPM) took over responsibility for the international police operation in Bosnia and Herzegovina from the UN and its International Police Task Force (IPTF). This is the EU’s first civilian crisis management operation under its European Security and Defence Policy (ESDP). Hence, the EUPM represents both a milestone and a crucial test for the civilian crisis mechanism of the EU in general and its police initiative in particular

March: Over 600 bodies are found in one of the largest mass graves following the Bosnian war, close to Zvornik in eastern Bosnia. It is believed that the bodies are victims from the Srebrenica Massacre in 1995. The International Commission on Missing Persons reported that the bodies had most likely been buried elsewhere and moved to this site after the war in an effort to conceal the crimes.

April: Bosnian Serb politician and Chairman of the Presidency of Bosnia and Herzegovina, Mirko Sarovic resigned following allegations of involvement in organising illegal military trading with Saddam Hussein’s Iraq. He is replaced by Borislav Paravac of the Serbian Democratic Party.

As Bosnia edges towards integration as High Representative to Bosnia and Herzegovina, Paddy Ashdown introduces sweeping changes to the constitution of the Republika Srpska. Ashdown abolished the Serb Republics’ Supreme Defence Council and all references to statehood from its constitution. The Dayton agreement left the two entities of Bosnia with their own president, government, parliament, police and even army. Ashdown’s measures reduce the powers, real and symbolic of the Bosnian Serb Republic.

The city of Mostar celebrates the reopening of the rebuilt 16th century bridge nearly 11 years after its destruction by Bosnian Croat forces.

Croat member of Presidency, Dragan Covic is dismissed by Paddy Ashdown for refusing to step down in the face of serious corruption charges, in an effort to preserve Bosnian’s international reputation. He was replaced in May by Ivo Miro Jovic.

By October, Serb leader bows to international pressure for a single Bosnian police force. In what is hoped to be the key to dissolving ethnic division a decade after the war ended.

February: The International court of Justice in The Hague begins the first round of arguments in the case of genocide brought by Bosnia and Herzegovina against Serbia and Montenegro. The claim of genocide was filed by Francis Boyle, advisor to President Izetbegovic during the war.

July: The UN tribunal in The Hague begins the trail for the 1995 Srebrenica Massacre. The largest war crime trial to date.

October: The Serb Republic vote in the general elections to split from the Federation of Bosnia and Herzegovina. Claimed to be one of the most important elections since Bosnia’s independence, as ethnic divisions were beginning to show. Bosnian Muslims threatened to abolish the Serb Republic and the Serb Republic continued to speak of secession from the country.

Bosnia join NATO Partnership for Peace programme together with Serbia and Montenegro. NATO earlier had excluded Bosnia and Serbia from the programme because of their failure to arrest and extradite former Bosnian Serb leader Radovan Karadzic and his top military commander Ratko Mladic.

The ruling on the 1995 Srebrenica Massacre by the International Court of Justice in The Hague rule that it was genocide. However, Serbia a cleared of direct responsibility.

The top fugitive by the UN for the role in Srebrenica, Zdravko Tolimir, Bosnian Serb military commander, was arrested. He was assistant commander of intelligence and security of the Bosnian Serb army and reported directly to General Ratko Mladic. After having been on the run for two years, he negotiated with the Serbian government concerning his surrender to The Hague tribunal.

Stojan Zupljanin, former Bosnian Serb police chief is arrested and transferred to The Hague to stand trial for war crimes. He had control over the police forces responsible for the detention camps where thousands of prisoners were kept in poor conditions and many murdered. It is also reported that he played a significant role in the destruction of Muslim and Croat communities in Krajina.

Bosnia signs the EU stabilisation and Association Agreement following a completed list of negotiations issued in 2005. An important step in the establishment of a stable order based on cooperation, within the framework of the EU’s stabilisation and association process with the countries of south-eastern Europe, as well as within the region

Europe’s most wanted man, Radovan Karadzic, former Bosnian Serb leader, is arrested in Belgrade after 12 years on the run. Celebrations in Sarajevo following the news of his capture.

Valentin Inzko takes over as High Representative. Also, Joe Biden, US Vice-President visits Bosnia ahead of closure of the Office of the High Representative to send the message for local leaders to work together. Inzko reports that Bosnian leaders are undermining state institutions despite international condemnation.

Radovan Karadzic’s trial at the UN tribunal in The Hague begins. He faces 11 counts of genocide, war crimes and crimes against humanity.

The Serb Republic of Bosnia passes a law to make it easier to hold referendums regarding national issues. This is viewed as a direct challenge to the High Representative’s authority and a way for the referendum for independence.

Ejup Ganic, Bosnian wartime leader is arrested in London after being accused of war crimes by Serbia. He was accused of conspiracy to murder Serb army soldiers in May 1992.

Ratko Mladic, Bosnian Serb military chief, is arrested by Serbian authorities after 16 years on the run. He faces charges over the Screbenica massacres in 1995. Following the arrest of Karadzic in 2008, he became the most prominent Bosnian war crime suspect at large.

Political leaders from all three ethnic groups reach an agreement on the formation of a new central government. Resulting in the end of a deadlock since the 2010 elections.

The trial of Ratko Mladic begins in The Hague in May. He faces charges of genocide and the massacre of more than 7000 men and boys in Srebrenica in 1995.

A mass funeral is held for 500 newly identified victims of the Srebrenica massacre. On the 17th anniversary of the massacre, thousands attend the ceremony in Potocari memorial centre.

Tolimir, former general for the Bosnian Serbs, is sentenced to life in prison by the UN war crimes tribunal for genocide and the Srebrenica Massacre

Zivko Budimir, president of the Federation of Bosnia and Herzegovina, is arrested on corruption charges. He stands accused of taking bribes to arrange pardons for convicts.

Six ex-Bosnian Croat leaders are found guilty of war crimes by the UN tribunal. They are convicted of persecuting and the murder of Bosnian Muslims to create an ethnic Croat state in Bosnia.

A large mass grave is discovered in Tomasica, north-western Bosnia. Forensic experts excavated the largest grave of ethnic cleansing victims in Bosnia. The site’s existence was reportedly known for years but the exact location was masked by Serbs.

Ratko Mladic refuses to testify at the trial of Radovan Karadzic at The Hague. He believed that testifying could prejudice his own case. The former military commander, Ratko Mladic, appeared as a defence witness at the War Crimes Tribunal in The Hague but refused to answer questions posed by the former leader of the Bosnian Serbs, Radovan Karadzic.

Protests in Sarajevo and Tuzla due to high levels of unemployment leave many injured.

Floods in May, believed to be the worst in modern history, leave a quarter of the population without clean water. 500,000 people are evacuated from their homes.

The EU’s Stabilisation and Association Agreement is eventually signed after being on hold since 2008.

September: 9th January – National holiday. Bosnian Serbs vote to keep the important date as a national holiday, despite opposition from Bosnia’s constitutional court. The US imposed sanctions for undermining the postwar order set up by the Dayton peace agreement in 1995.

Convicted Bosnian Croat war criminal Slobodan Praljak died after drinking poison in a war crimes court in The Hague. He killed himself seconds after hearing that he has lost his appeal against a 20-year prison sentence.

The UN war crimes tribunal for the former Yugoslavia closes after more than two decades despite unfinished cases.

The High Judicial and Prosecutorial Council hopes to complete war crimes cases by 2023. Hundreds of unfinished cases aim to be completed within the next five years.

The European Commission President Jean-Claude Juncker is embarking on a tour of the Western Balkans to promote a new strategy to the region.