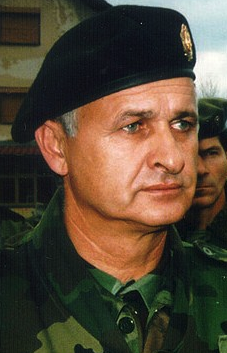 Deputy Commander, Chief of Staff and eventually Major General of the Bosnian Serb Army. In 1998 Radislav Krstic was indicted for war crimes by the ICTY in connection with the genocide of 8000 Bosnian Muslims during the Srebrenica massacre. In August 2001 the ICTY sentenced Bosnian Serb General Krstic to 46 years’ imprisonment for genocide and his role in the massacre of Srebrenica. Krstic became the first man convicted of genocide by the Tribunal.

Srebrenica was part of the zone controlled by the Drina Corps, one of the Corps of the Republika Srpska army. Radislav Krstic was the Chief of Staff of the army and Commander of the Drina Crops. By 1998 he had been promoted to Major General.

On 1 November 1998, Krstić was indicted by the ICTY in The Hague for genocide, complicity to commit genocide, extermination, two counts of murder, and persecution. On 27 October 1999, the indictment was amended to include one count of deportation and one count of inhumane acts. The UN panel of judges ruled that he bore the responsibility, even though he ordered from others to carry out the mass executions.

Krstic’s arrest in December 1998 highlighted a promising new cooperation between the tribunal and NATO troops. His car was disabled whilst driving to Banja Luka on business and Krstic was taken into custody in an operation launched by Stabilisation Force in Bosnia and Herzegovina (SFOR). He was taken to The Hague for trial.

The fact that the arrest occurred in the American sector of northeast Bosnia caused some outrage in Serbia as well as with the Bosnia Serb leader, Nikola Poplasen, who later declared he would reduce contact with NATO peacekeeping forces to a minimum. However, a clear message from NATO that other military leaders still at large would too be brought to justice eventually.

Krstic pleaded not guilty to charges of genocide or complicity to commit genocide; persecutions having taken the form of murder, cruel and inhumane treatment, and acts of terror; destruction of personal property and forcible transfer; extermination; murder within the meaning of Article 3 of the Statute; deportation or inhumane acts amounting to forcible transfer. He did not deny that the crimes had been committed by the Bosnian Serb Army but he denied responsibility for issuing the orders and placed the blame with General Mladic.

The trial heard 102 prosecution and 12 defence witnesses and lasted for 94 trial sessions. Many Srebrenica residents who survived the massacre travelled to The Hague to testify against Krstic. Many delays occurred due to ongoing health problems related to the amputation of his leg during wartime.

On 2nd August 2001, Krstic was convicted on all charges and sentenced to 46 years in prison. Two weeks later, the prosecution and defence appealed against the ruling and the appeals chamber unanimously sentenced him to 35 years imprisonment. Krstic served his sentence in Great Britain from 2004.