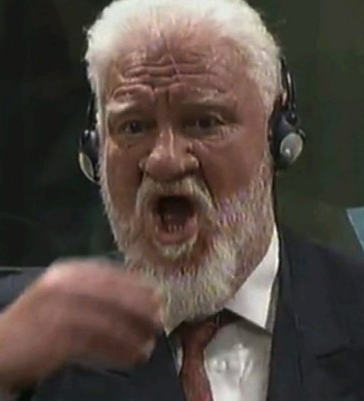 Over twenty years after the conflict in The Balkans, Bosnian Croat war criminal Slobodan Praljak killed himself in The Hague during an appeal hearing. The ultimate in cowardly acts to end his life the same way he conducted himself during the bloody break-up of Yugoslavia.

Praljak rose to Commander of the Bosnian Croat Defence Forces (HVO) in 1993 and in 2004 handed himself in to The Hague as part of Croatia’s willingness to comply with the court in return for acceptance into the European Union. He was granted release until 2012 when he was ordered to return and in 2013 was convicted of persecuting, expelling and murdering Bosnian Muslims during the war, sentenced to crimes against the Bosnian city of Mostar and crimes against humanity.

The ICTY found that Praljak made little effort to prevent the rounding up of Muslims in Prozor in the summer of 1993. Also that planned murders and the destruction of the historic Old Bridge of Mostar and mosques were allowed to happen. Most significantly, he was charged with ordering the destruction of Mostar’s 16-century bridge in November 1993, which arguably caused disproportionate damage to the Muslim population.

The sentencing to 20 years in jail comes only one week after the life sentence of General Mladic, ‘the butcher of Bosnia’ was announced.

But did the war really end?

During the 24 years that the ICTY has been in operation, 161 people have been indicted and 90 convicted. An important question to now ask as the ICTY prepares to close shop, have the trials helped or hindered the future of the region?

Many cannot accept that the trials will end this year as thousands of war criminals walk free. Significant numbers of the regions youth have chosen to leave, as political powers push nationalist agendas in the hope to move forward. When the reality remains that war survivors can come face to face with their torturers on a daily basis as they walk free due to short sentencing or no sentencing at all.

But as witnesses grow older and are more reluctant to come forward, people are growing tired of the trials, preferring to finally put this behind them instead. If the prosecution continues the war is still ongoing, just using very different means.