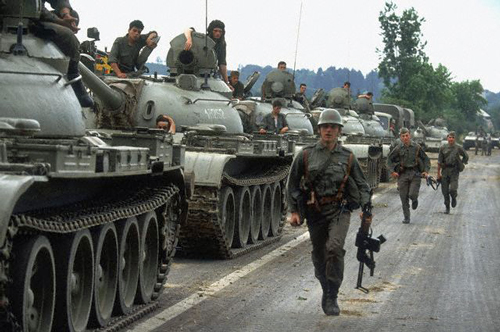 As the most ethnically homogeneous of the Yugoslav republics, the most western-orientated, most prosperous and geographically isolated, succession made sense for Slovenia.

Rewind to December 1990 when Slovenia held a referendum with the overwhelming majority siding with the move for independence. Immediately following the vote, a new defence doctrine was introduced by the Yugoslav People’s Army withdrawing all power from each republic’s Territorial Defence Force and handing it over to the Army headquarters in Belgrade. Slovenia decided not to follow orders. They kept their weapons, changed the constitution to maintain power and set up a secret command structure. Otherwise known as the Manoeuvre Structures of National Protection, similar to a home guard, it intended to allow the republic to create their own defence structure. Rather than hand over power to the Yugoslav People’s Army, Slovenia instead mobilised their secret defence structure.

After months of stockpiling weapons Slovenia was ready to announce its independence from Yugoslavia on 25th June 1991. In a brilliant tactical manoeuvre, independence was announced one day ahead of schedule, Belgrade was caught off guard and Slovenia was well prepared for battle when Milosevic invaded on 26th June 1991.

The response from Belgrade was to send in the Yugoslav Army to take control of borders between Italy and Austria. Fighting broke out. The Yugoslav People’s Army, at this point was still made up of soldiers from all republics and therefore Slovene’s found themselves fighting their own countrymen. Poor communication meant that in many instances they didn’t know they were fighting one another. The Slovenes blockaded the Yugoslav barracks using their own vehicles and trapping the Yugoslav soldiers. The young soldiers had the upper hand in terms of resources but lacked the experience to take advantage of the situation.

The war formally ended with the signing of the Brioni Accord on 7th July 1991. Slovenian and Croatian independence was agreed to. Slovenian police and armed forces were recognised as sovereign on their own territory and that all Yugoslav military units would leave Slovenia by October.

After ten days of fighting and less than 100 deaths, Belgrade retreated.  The Slovenes stepped aside and allowed the Yugoslav People’s Army to leave with their weapons and to destroy all remaining military installations as they went. When the Yugoslav People’s Army cleared out, they left the Slovenes with their freedom. The Slovenian government and media presented the conflict to Western audiences in such a way that generated considerable international sympathy.

Most importantly, by this point Serbia was already pre-occupied with the emerging situation in Croatia.