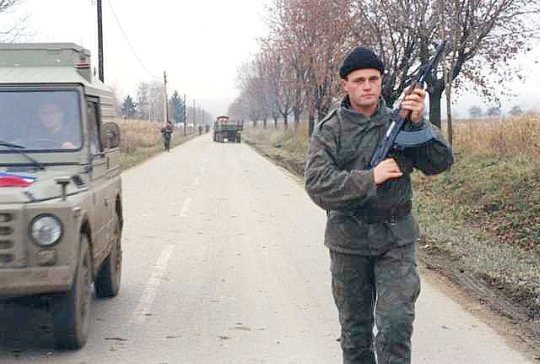 In the aftermath of the Second World War, the Balkan states of Croatia, Bosnia-Herzegovina, Serbia, Montenegro, Slovenia, and Macedonia became better known as the Federal People’s Republic of Yugoslavia. A socialist state created after the German occupation in World War II, bringing together Serbs, Croats, Bosnian Muslims (Bosniaks), Albanians and Slovenes under a comparatively relaxed communist regime in which tensions had been suppressed under the leadership of President Tito.

Tito was dedicated to a communist ideal that exceeded individual ethnic nationalism. He also recognized the threat to Yugoslavian unity posed by a strong Serbia, the largest of the country’s republics. When piecing together post-World War II Yugoslavia, Tito purposefully divided Serbia into two provinces; Vojvodina in the north and Kosovo in the south. Therefore, leaving a third of the Serbian population outside their own province and an Albanian majority.

The death of Tito in 1980 gave way to rising nationalism among the Yugoslav republics and threatened to split the union. Tensions re-emerged. The rise of the Serbian leader Slobodan Milosevic in the mid-eighties only served to add fuel to the fire and set in motion the discontent between Serbians living in Bosnia and Croatia. The Serbian desire for a reunification presented itself in a bourgeoning nationalistic movement. Milosevic shaped the issues of alleged Albanian mistreatment of Serbs and a widespread sense of economic deprivation into concrete political goals. In 1989, violent Serbian demonstrations drove the constitutionally elected leaders of both Vojvodina and Kosovo out of office.

Meanwhile, Yugoslavia’s government struggled unsuccessfully to cope with a plummeting economy and the re-emergence of local nationalism. The 165-member Central Committee of the Yugoslav Communist Party held an emergency meeting in October 1988 but could not find a solution to the problem. Two months later, the entire Yugoslavian cabinet had resigned. In January 1989, the Communist Party voted to give up its power monopoly.

The Yugoslav Federation started its dissolution in 1991 with Slovenia, Croatia and Macedonia declaring independence from the Serbian-dominated central government in Belgrade. The war in Croatia followed their declaration of independence with a heavily Serb dominated Yugoslav army supporting Serbian separatists.

Bosnia, once an almost entirely Muslim state witnessed high levels of immigration from Serbia and Croatia between the 1970’s and 80’s. By the 1991 census the Bosnian population was close to 4 million: 44% Bosniak, 31% Serb, and 17% Croatian. A complex mix of Serbs, Muslims and Croats. A coalition government was formed in 1990 led by Bosniak Alija Izetbegovic and with power split between parties representing each ethnicity.

Tensions began to rise from the other Yugoslav republics in their bid for freedom. To keep Bosnia-Herzegovina from seceding, Serbia offered to address territorial boundaries. But Izetbegovic rejected the Serbian offer because he felt it did not offer real power to the Muslims.  At the same time Radovan Karadzic, the leader of the Bosnian Serbs and the Serbian Democratic Party withdrew from the government and established their own Serbian National Assembly. In March 1992 President Alija Izetbegovic declared Bosnia’s independence following a referendum vote of which 90% voted for independence. Karadzic and his Serbian National Assembly attempted to boycott the vote as Bosnian Serbs wanted instead to be part of ‘Greater Serbia’, a dominant Serbian state in the Balkans as envisaged by Milosevic.

In May 1992 Bosnian Serb forces, together with Milosevic and the Yugoslav army, rebelled against the declaration of independence in an armed struggle to determine which ethnic group would control the country. Serb forces, in a bid to justify their aggression, asserted that Bosnian President Alija Izetbegovic wanted to turn Bosnia into a fundamentalist Islamic nation. Although Bosnia’s Muslims were in the majority with 2 million people, Bosnia’s Serbian minority was better armed, receiving support from the neighboring Serbian army.

They launched their attack on Sarajevo and Bosniak dominated towns of Eastern Bosnia; Zvornik, Foca and Visegrad, forcibly removing Bosniaks from the area. Later these brutal acts would be identified as ‘ethnic cleansing’. Bosnian Serbs set out to “purify” Bosnia by expelling Bosniaks from the country. Bosnian Serb forces drove Muslims from their homes, subjecting them to mass rape, confinement in concentration camps and genocide. International alarm was aroused mainly by pictures of starving concentration camp inmates and civilian casualties in Sarajevo as its Muslim population was besieged by the Serbian army in March 1992.

By the end of 1993 Bosnian Serb forces controlled almost three quarters of the country. Karadzic’s Serbian National Assembly had set up their own Republika Srpska. The majority of Bosnian Croats had left the country and Bosniak population remained only in small towns and villages.

Peace proposals fell on deaf ears as Serbs refused to give up any territory. The U.N. refused to intervene in the conflict, however a campaign by its High Commissioner for Refugees managed to provide humanitarian aid for displaced, malnourished and injured victims of the war.

By 1995 only three towns in eastern Bosnia remained under the control of the Bosnian government; Srebrenica, Zepa and Gorazde. Despite being declared by the U.N. as ‘safe havens’ in 1993, Bosnian Serb forces attacked Srebrenica on 11th July 1995. Dutch peacekeepers were overpowered and Bosnian Serb forces sent women and children out of Srebrenica. Many were raped or sexually assaulted. Men were kept behind and either killed immediately or sent by bus to mass killing sites.

It is estimated that over 7000 Bosniaks were killed in Srebrenica by Serb forces.

Eventually after 3 years the International Community began to respond and in August 1995 NATO joined efforts with Bosnian and Croatian forces to bomb the Bosnian Serb positions in an attempt to restore Bosnia’s integrity. Trade sanctions imposed by the U.N. had crippled Serbia’s economy and now NATO had managed to halt Serb military forces on the ground. Serbia ended the conflict beaten, battered and alone: Croatia and Bosnia were fully independent, Slovenia and Macedonia had already gone, Montenegro left later and in 1999, Kosovo’s ethnic Albanians fought Serbs in another brutal war to gain independence.

As a result, Milosevic agreed to enter negotiations in October 1995. The United States of America sponsored peace talks in Wright-Patterson Air Force Base in Dayton, Ohio. Izetbegovic, Milosevic and Croatian President Franjo Tudjman were present to create a federalized Bosnia divided between a Croat-Bosniak federation and a Serb Republic. The three parties agreed on a government structure for Bosnia: a six-member council consisting of two Muslims, two Serbs and two Croats, headed by two co-chairmen to function as prime ministers. Government ministries would also be divided among Serbs, Croats and Muslims.

It can be argued that the international community did very little to prevent the atrocities committed against Bosniaks and Croats in Bosnia. However, it did actively seek justice against those who committed them. The U.N. Security Council set up the International Criminal Tribunal for the Former Yugoslavia (ICTY) at The Hague, Netherlands. The first international tribunal to prosecute against genocide.

The death toll of the war was believed to be around 100,000 (around 80% Bosniak), with 2.2 million people having been displaced. It is the most devastating conflict in Europe since World War II.